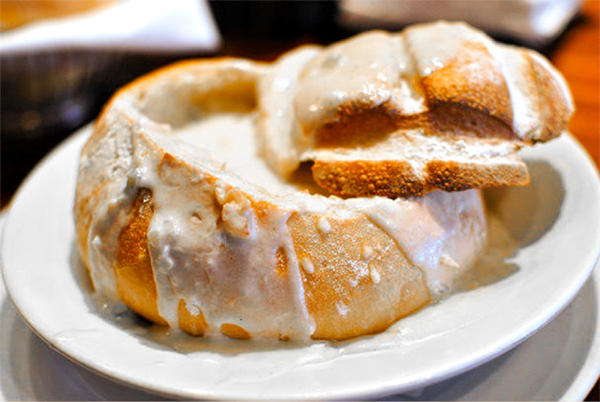 “Ah, the bread bowl. As a chowder vehicle, it’s a definite step up from a plain old bowl, and the version at Atlantic Fish Co. on Boylston Street in Boston’s Back Bay is my favorite in the city. In a kitchen overseen by executive chef Danny Levesque, an oversized fresh boule is carved out and filled to the very brim with chowder; the boule top teeters atop like a jaunty cap. It’s not exactly neat: The chowder spills out over the sides of the boule like a volcanic eruption, but that lava flow’s chock full of fresh chopped clam meat and softened potatoes. Atlantic Fish’s chowder is a reasonably thick, creamy variety, but not pasty or lacking in depth. And of course, the bread bowl is not simply ornamental, but can be used to scoop up every delicious drop. ($9 bread bowl, $6 cup)”